This website was created as part of a major research grant from the Arts and Humanities Research Council of the UK, 2007-2011, 'Identification of the Scribes Responsible for Copying Major Works of Middle English Literature.' The team was made up of Professor Linne R. Mooney, University of York (Principal Investigator), Dr Simon Horobin, University of Oxford (Co-Investigator), and Dr Estelle Stubbs, University of York (Research Associate), and Honorary Research Fellow, Humanities Research Institute (HRI), University of Sheffield. Also assisting in the preparation of this website were Professor Daniel Mosser, of Virginia Tech, who assisted while at the University of York in autumn terms of 2008 and 2009 as Leverhulme Visiting Professor, and Michael Pidd, of the Digital Humanities Institute at University of Sheffield, who set up the data base and created the website. Dr Helen Killick also assisted while studying for her doctorate at the University of York, supported by an AHRC studentship attached to this grant. Further information about the principals can be found on their university's departmental websites.

We set out to offer an image of each scribal hand in each medieval or early modern manuscript of the English writings of five principal authors of the late fourteenth and early fifteenth centuries: William Langland, Geoffrey Chaucer, John Gower, John Trevisa and Thomas Hoccleve. In addition to these overall aspect images of the scribal hands, we also offer brief descriptions of the manuscripts and images of sample letter forms for eight letters, a, d, g, h, r, s, w and y, chosen as having the most variable forms in late medieval English scripts and thus the best distinguishing graphs of a scribal hand. We also offer images of some wildcard letter forms (including thorn and yogh) for other letters or marks of punctuation that are distinctive to each scribal hand.

This website does not include or illustrate manuscripts of the French or Latin writings of John Gower, except where these occur in the same manuscripts as his Confessio Amantis, which is written in English. 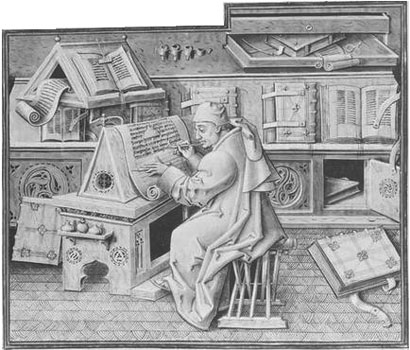 With a few exceptions (mounted early in the project period), because of time and funding limitations, we have also not been able to mount images and descriptions of the manuscripts of other authors' works written by the same scribes as wrote works of our five authors. In most cases these are listed under the scribes' profiles, but with blank entries for the descriptions and images. We hope in future to be able to complete these to offer a fuller picture of the work of these scribes.

We welcome suggestions for corrections to the website, which should be sent to e.stubbs@sheffield.ac.uk or linne.mooney@york.ac.uk with the email heading 'Scribes'.

Technical problems should be addressed to dhi@sheffield.ac.uk

We are also open to considering setting up links to other project or library websites; please address queries relating to these to the same email address with the email heading 'Links'.